The Differences between bolt on and lift out guard rail systems

Bolt On vs. Lift Out Guard Rail

When choosing guard rail for one’s warehouse or manufacturing facility there are some things to consider regarding the mobility of rails. For the most part, all posts for warehouse guard rail are anchored into the concrete. Therefore, once the posts are in place, it takes a lot of work to move their location. Essentially, they are fixed into place once installed. From there, rails are attached to the posts to create a barrier which in combination creates the guard rail system. Rails can either be bolted into the posts through pre-drilled holes that match up with the corresponding guard rails or they can be dropped into slots that are welded onto the posts. One system is called bolted guard rail because the rails are simply bolted into the posts and the other system is called drop in guard rail since the rails are simply dropped into the slots on the posts.

Which guard rail system is right for you?

There are advantages and disadvantages to each style. Some advantages to bolt on style guard rail is that it’s normally less expensive and it creates a more durable connection in the railing system since they are more secure. A disadvantage would be that you can’t easily access areas once the rail is bolted into place. To remove the rail, requires taking out the bolts attaching it to the rail. However, it’s rare that you would want to remove all railing in a system. A simple solution to this is to install lift out adapters only in the sections that you would want to possibly remove and leave the other sections bolted to the posts. The lift out adapters bolt into the holes where rails would normally bolt in. Those adapters then act in the same way as welded slots would act on lift out style guard rail.

Some advantages to lift out guard rail is that all rails are removable. If you have a scenario in which you need to access all points behind the guard rail system, this could be more advantageous. Also, the initial install would be quicker since the rails don’t need to be bolted into the posts, they can simply be dropped in. Some disadvantages to lift out guard rail is that it’s typically more expensive due to the additional welding costs incurred in the manufacturing of the posts, also the rails are not as secure as bolt on and will have more play since they are sitting in a slot instead of secured by bolts.

Lift out sleeves allow you to remove railing to gain access through the guarding. 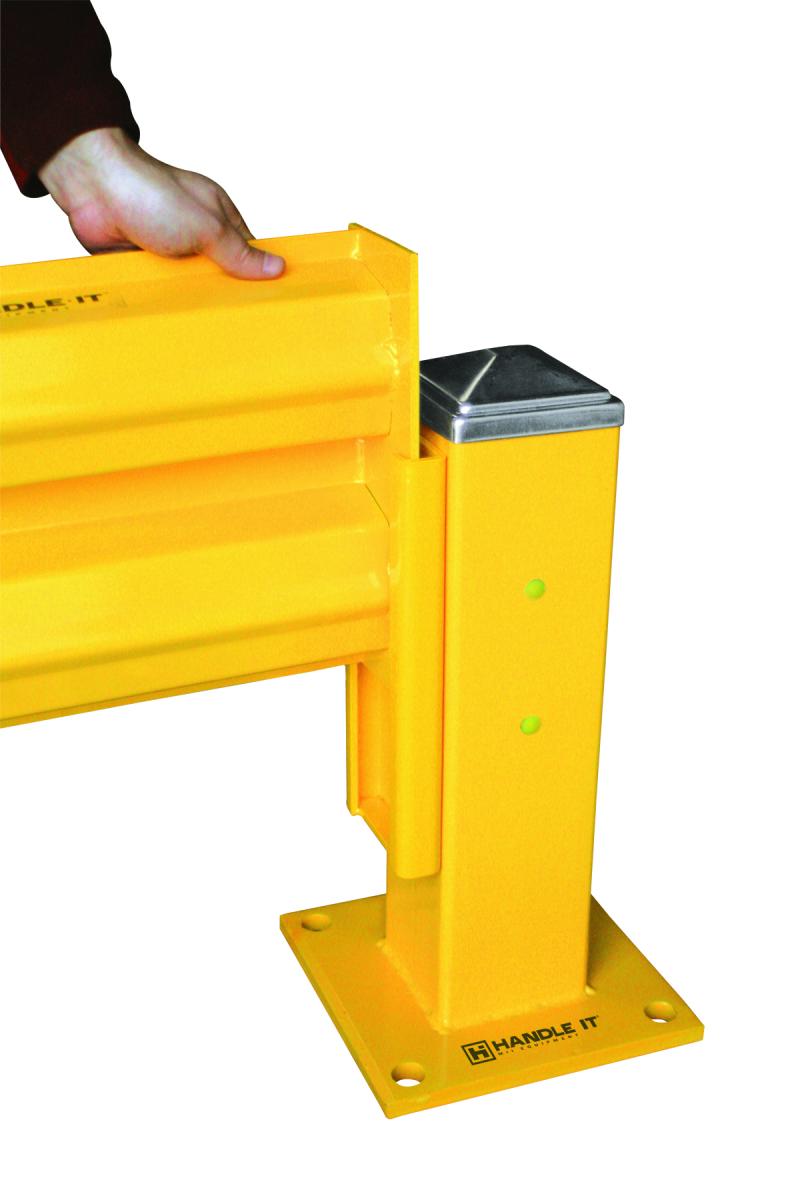 Shop our guard rail systems and components to improve the safety of the people, structures and items in your warehouse.

Shop rack & post protectors to decrease the damage to your pallet racks and posts due to impact from forklifts and pallets.